Ah…an unexpected productive day on the blog.  Somehow, I was able to overcome Beethoven’s 7th symphony movement #2, to find some voice and words worth expressing.  My final poem or muse…and then sleep.  No need to wait and proof in the morning.  This draft is good enough for a blog.  One can always improve words, but I am tired and satisfied.  Good night fellow man…and woman…sweet dreams.

But I know what the future holds

My fuel will again be burnt

On the banal task

To “earn” a living

To make a profit

Forced to carve a small niche

To enjoy slivers of beauty

How many more beings will you sacrifice?

Slaughter to your small greedy task?

Look in the mirror

To understand our true purpose

We were designed to excel

To challenge our uninterested God

To fight the Grand War

Into the heart of darkness

And die a Noble Death

Beautiful ruler of the seas

Dreams from wolfish past

Howling at the moon

No fabricated tools or laws

The eternal Battle of the Titans

Failing to comprehend the Grand War

Fox News is labeling the protesters associated with “Occupy Wall-street” as a bunch of loonies and lefties.  Their own selective video interviews support their hypothesis.  You can always find loonies in a protest movement.  But I am here to say that I “think” they are wrong.  These people protesting, as well as thousands, millions, perhaps billions, of those not protesting, have an innate sense that something is wrong not only with America, but with the human direction as a whole. 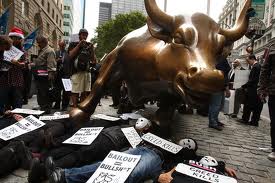 The protesters may not have a crisp clean sound bite articulating what they stand for, but I “believe” they are simply lashing out at their general discontent with the human condition and lack of inspiring visions in which they can trust.  Apparently, many of the protesters are young, either in college, not in college, or recently out of college.  Of course there are many other people in the crowd that don’t fit neatly into these categories, but say for argument’s sake most of them are young.  The young still have ample energy, hopes, dreams, and expectations of what life should be.   They have concluded, through this protest, that the status quo doesn’t meet their expectations.

I have been fortunate most of my life to “benefit” from the status quo, but all throughout something deep down inside prevented me from truly embracing the status quo.  I can’t express my discontent in a clear crisp sound bite, which is actually the reason I started a blog.  I am not trying to promote my blog, but I am trying to explain why these protestors may not have a clear message and properly formatted solutions.  The reasons behind my discontent are very complex and difficult to express.  As such, I have resorted to philosophy, poetry, music, religion, history, literature, science, as a means to express my discontent and propose possible solutions regardless of how ridiculous they may appear.

I can’t say for sure that I am correct in my hypothesis, but I plan to meet with these protesters in my city and observe for myself.  I will report back with pictures and additional thoughts.  In the meantime, keep an open mind and give these protesters the benefit of the doubt.  As the saying goes…innocent until proven guilty.

I have made several posts expressing my concern about over-population, but this doesn’t mean I don’t like children.

In fact, when I argue for a smaller population it is precisely the children that are top of mind.

Let me pose this question.  Which choice below seems more aligned with the concept of individual freedom?

Option A:  One may have as many children as one desires regardless of the conditions into which these children will be born and without considering the overall quality of their life into the future.

Option B:  One should ensure conditions are sound before bringing children into existence and ensure the overall quality of their life in the future will be optimal.

Hmmm….before you make your choice, contemplate that we shouldn’t just think about the freedom of the “parents to be”, but also the future freedom of the children and the society that will either “support” them or enable and in fact “benefit” from them.

Do we as Americans, or as a species as a whole, currently provide our children with the ultimate foundation to grow and develop into intelligent, enlightened, healthy adults?

Do we as Americans, or as a species as a whole, provide our children with inspiring visions and purposes such that when they enter the “real” world they won’t have to endure the painful discovery that Santa Clause was merely a myth and that the world is run by the Scrooge?

Alternatively, do we simply leave problems unsolved and bring more and more beings into the world further complicating or exasperating our unsolved problems relying on blind faith that some future generation will solve the problems through miraculous new inventions?

Are our unsolved problems passed on from one generation to the next analogous to the cycle of a tropical depression evolving into a tropical storm, a category one, a category two…all the way to category five?  Is there a limit to the number of potential categories and at what point will we figure out the answer to that question?