Four million metric tons of matter is converted into energy every second.  The core burns at 27 million degrees Fahrenheit.   In 5 billion years scientists predict the sun will begin to die and slowly begin to expand.  The Sun’s expanded radius will boil away the Earth’s oceans and tidal forces will pull the Earth into the Sun and incinerate. 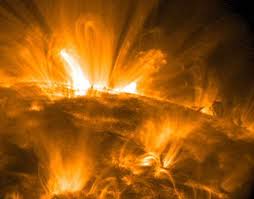 I hear there is no sound in space.  But imagine, if you will, the sound of the Sun.  I imagine the sound to be like the continuous explosion of a thousand erupting volcanoes combined with the roar of a billion forest trees ferociously burning every second.  Perhaps the silent power is even more terrifying.  Who really knows how much longer the Sun will silently burn in such an ideal manner for us animate creatures here on Earth?

9 thoughts on “Sound of the Sun”